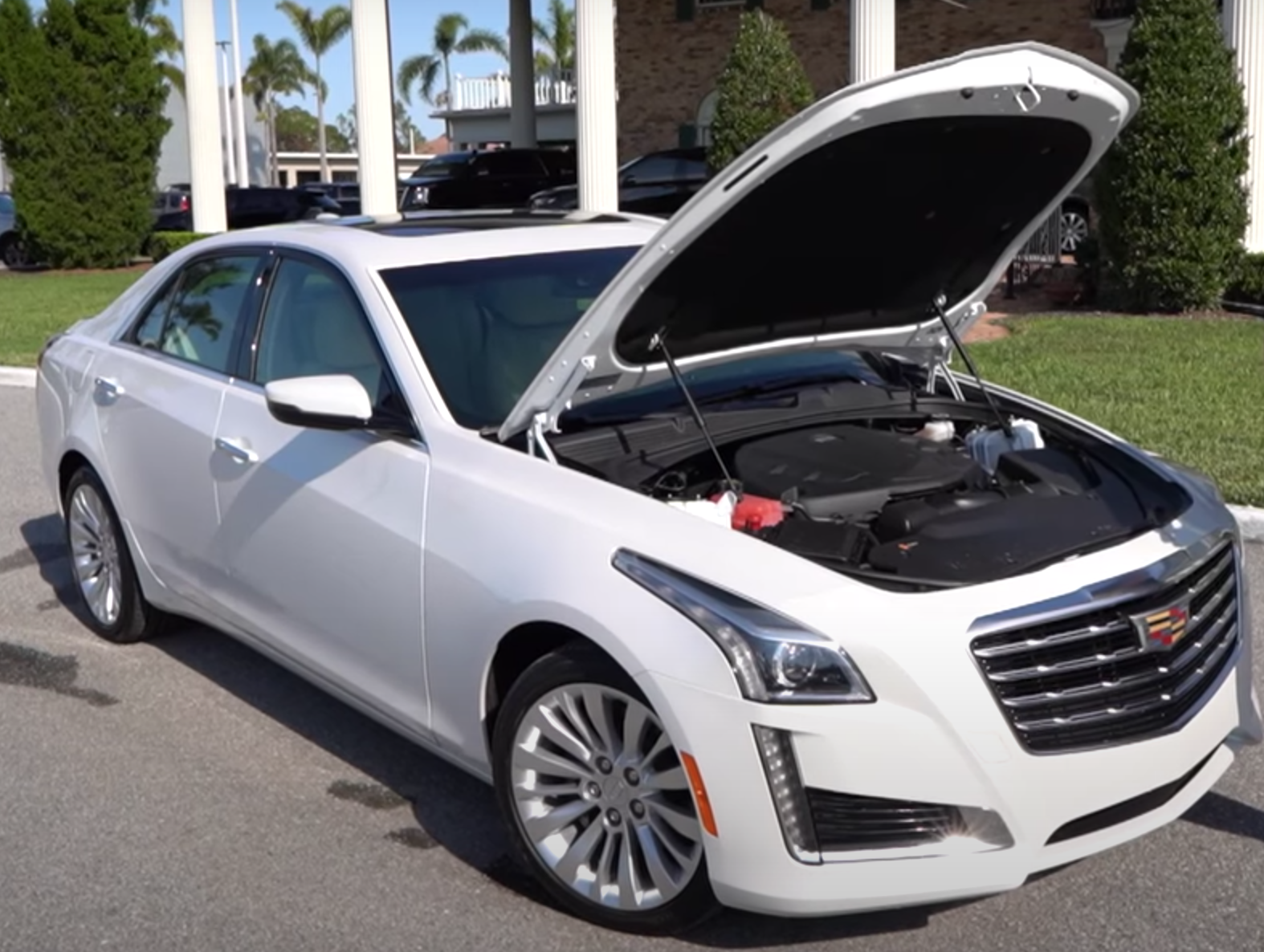 Cadillac CTS is cheap based on poor sales, SUV takeover, poor reliability rate, consumer complaints, recalls and lawsuits, and so on. These factors have drastically reduced its price.

The Cadillac CTS is a luxury vehicle produced and sold by General Motors Company. The first Cadillac CTS was manufactured in 2002 for the 2003 model. And it had spanned over three generations (2003-2019).  There’s also the Cadillac CTS-V model, which is the higher version of the CTS.

The first generation CTS cars were produced in 4-door sedans on the GM Sigma platform. However, the second generation has three body styles: 2-door coupe, 4-door sedan and 5-door sports wagon. The third generation comes only as a sedan with a stretched model of the GM Alpha platform. CTS stands for Catera Touring Sedan.

CTS comes in different year models spanning over 17 years. The last model is the 2019 Cadillac CTS.

Famous since the 1920s, the Cadillac is a popular brand in America. Owning a Cadillac was a dream come true back in the day. It still is for some people, especially the older generation. However, a lot has happened in more than a hundred years since the rise of the Cadillac in the Auto industry. The CTS model has experienced its share of criticisms since its production in the 2000s.

The price of a luxury car is higher than a non-luxury car. Luxury vehicles have more excellent performance abilities compared to lesser cars. They also have newer technology and safety features as well as luxurious interiors.

It is a wonder why the price tags for CTS have been diminishing with each passing year. Could it be that the Cadillac CTS cannot keep us with its competitors, or that people’s dream of having a Cadillac is waning?

The fall in the price of the Cadillac CTS has prompted our review. This review will tell you the reasons why Cadillac CTS is becoming cheap.

Moving On From Sedans

In America and over the world, the demand for Sedans has trickled down. Families are going for SUVs and Crossovers because their size, cargo space, etc., fits their needs. The CTS is a sedan with smaller cargo space, and it falls under a mid-sized car.

Furthermore, most auto manufacturers are pursuing the SUV market trend. The current demand for SUVs and Electric cars could be attributed to CTS being inexpensive in the market.

The Depreciating Value of Luxury Cars

Although it is fantastic to own a luxury car like—

you should know that its market value depreciates as you walk out of the dealers’ shop. Compared to non-luxury cars, they depreciate faster. Their declining value is due to their expensive maintenance fees, scarce spare parts, and few qualified mechanics. In 2018, the CTS dropped in value by 34.4% in just a year. Again, the  CTS also has a poor resale value because it lacks brand resources.

Presently, only used CTS vehicles are available in the market. Because GM discontinued its production in 2019, the declining value and availability of only used CTS cars may be working on its price reduction.

Past Glory, Past Mistakes

Once, Cadillac productions had the leading symbol as the “standard of the world”. When it first emerged, it was one of the world’s leading brands. But in recent decades, the brand’s fall from quality has affected its market price. The first generation of CTS was branded as the worst cars of the Cadillac models. This first generation affected the reputation of the subsequent generations. It is even regarded as subpar compared to other luxury sedans in the sedan sector.

Cadillac CTS is one of the top 3 most complained about vehicles. The overall worst problem complained of was the engine. The 2003 model got the most overall complaints, especially on the rear bezel cover. The 2009 model was the worst model year because users included a more expensive repair cost and lower mileage to their reports.

These issues have affected consumers’ perception of the Cadillac CTS, and prices had to be reduced to drive sales.

A vehicle reliability rating is based on the expense, regularity, and severity of unplanned repairs and maintenance. A vehicle’s reliability can significantly influence the satisfaction you get from your car over the years. It can also influence its resale value when you want to sell.

Overall reliability was second to the last.

Even the 2019 model predicted reliability rating was poor.

Based on their reliability rate, consumers are wary of buying CTS cars, making the Cadillac CTS cheap.

These poor sales have contributed to its low market price.

One of the beauties of a luxury car is in its technological features; they let their owners have a good time. The CTS has continually improved its technology. The 2019 CTS has great technological details like Hotspot, Keyless Open, Cadillac Connected services capability, Memory Package, Remote Start,  Rear Park Assist, OnStar and  capability, 4G LTE Wi-Fi, etc

However, the technological malfunction is a huge turnoff—

Just to name a few… these malfunctions make the Cadillac CTS cheap and lower-ranked than its competitors like Audi R8 and BMW M8.

The interior parts of most Cadillac CTS models have spacious front seats but are not roomy enough. Compared to other midsize rival motor companies. The legroom is small. A tall individual may experience discomfort.

The cargo space of most Cadillacs falls below average. The cargo is not ideal for more oversized luggage.

These features could give you a heavy discount on a Cadillac CTS.

A 2005 CTS caught fire after the ignition was turned on. Investigations showed that there were electrical malfunctions in the heated seats. GM recalled 53,500 2014- 2015 cars because of this mishap. In 2011, 17,000 vehicles were recalled because of Airbags deployed without a car crash. Also, in 2014, GM recalled 21,863 2014 models due to transmission problems.

In 2014 Cadillac CTS models had the highest recalls. Some of these recalls led to lawsuits. These recalls affected customers’ trust in the brand and the vehicle’s price.

The problems of CTS Cadillac vehicles have led to several class-action lawsuits. One of the complaints is false safety ratings on window stickers in the 2014 models. Others lack navigation, climate controls, and backup cameras, and cracked spider web screens.

Is Cadillac CTS Expensive to maintain?

The average yearly maintenance rate of a Cadillac CTS is $663. Most Cadillac CTS owners would also agree that the maintenance cost is minimal, making it a very cheap car to own. However, they recommend you buy a car with a warranty.

Like most Cadillacs, the CTS target market is individuals in their 20s and 30s. The reason is that these potential buyers have little knowledge of Cadillac’s rise and fall.

Cadillac CTS is ideal for all sexes. The average Cadillac owner could be any age. The young, middle-aged, and older people love the CTS.

The Cadillac CTS is an affordable luxury sedan with an aesthetic and luxurious style, a strong engine, and accurate handling and braking. The car gives users a satisfying driving experience. The CTS model is ideal for any age group. However, the CTS has been discontinued, and only used vehicles are currently in the market.

Cadillac CTS is cheap based on poor sales, SUV takeover, poor reliability rate, consumer complaints, recalls and lawsuits and so on. These factors have drastically reduced its price.

Despite these factors, the CTS has a longer lifespan than most vehicles. We hope that the subsequent Cadillac productions will help bring back Cadillac into the spotlight.

And this list of reasons are not only limited to the cheap Cadillac CTS, there are a ton of other cheap cars—